Youth of the Year: Louis Melendez 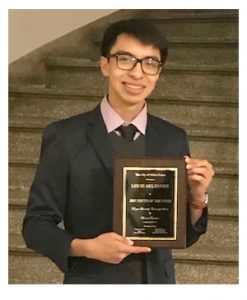 Louis Melendez, a resident of White Plains, a senior at White Plains will be graduating White Plains High School June 2019. Louis has a grade point average of 4.4.

Among Louis’ community service activities include being a member of the Youth Bureau’s Youth Court which he joined 2016. He has contributed countless hours to the program and helps youth needing direction and support. Louis has been a consistent and active participant at Westchester County Budget hearings for White Plains youth. He has spoken out on the value of youth programs and the impact of youth agencies, especially the White Plains Youth Bureau’s ability to change the trajectory of at-risk youth. Louis has also been a voice for youth regarding gun violence and how this important issue affects our community and our nation. He has participated in forums and workshop including a Gun Violence Forum organized by Congresswoman Nita Lowey.

Louis has worked at the White Plains Center for Nursing Care as a Nurse Station Assistant and he currently works weekends at Saint Bernard Church.

Louis states that he has “a passion to help others and to make an impact on the lives of people that he meets.”

Deeply imbedded in the White Plains Youth Bureau’s mission is a commitment of service and advocacy for both children and their families. The Workforce Development Academy for Youth Program has had the opportunity to serve multiple children in one family with great success many times over. The Collins family, (The name has been changed) is one such case. Jenine, Constance and Thadius, were three siblings that were introduced to the Youth Employment division of the Youth Bureau offering first time jobs to all three. The youngest two, Constance and Thadius became members of the WDAY Program in their junior years of high school. Within the program they received various enrichment services, career opportunities and job readiness services. All three have credited the Youth Bureau with offering them opportunities to begin their work history that helped them gain skills sets that gave them a significant advantage. Constance excelled and was awarded the Bill Gates scholarship to attend Hofstra University for both her undergraduate and graduate studies. She is now a teacher in the Bronx, NY and has returned to the Youth Bureau to tell her story at special fundraising occasions. Thadius graduated from SUNY Delhi and Jenine is now serving in the United States Army. Their parents were always hard working having migrated to this country for a better life and we here at the youth bureau are all proud to have played a part in their ultimate success.